Wendy joined Sea Turtle Inc. in 2020 bringing 25 years of corporate experience as an executive in the insurance and financial services market, specializing in acquisitions, sales, revenue building, marketing and operational execution. As a former Chief Operating Officer and Vice President Wendy brings a new level of depth and structure to the organization as we prepare for the next phase of growth and advancement of the mission at Sea Turtle Inc.

Wendy and her husband Mark relocated to South Padre Island in 2016 and are actively involved in supporting island businesses and the city government. Wendy serves on the board of directors for the South Padre Island Chamber of Commerce. 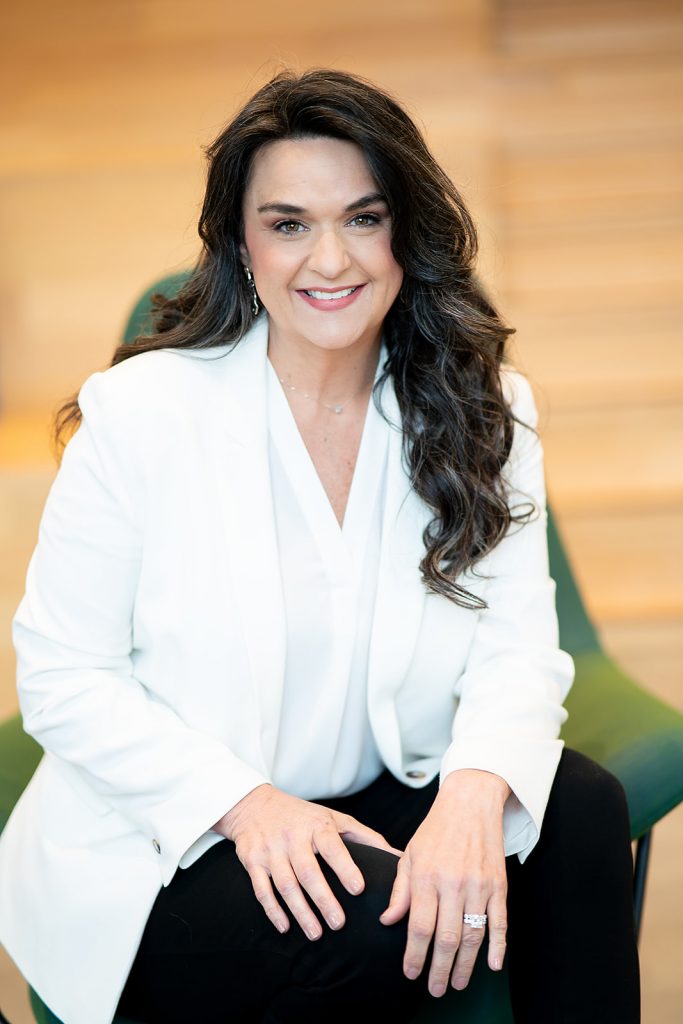 Give To Our Cause 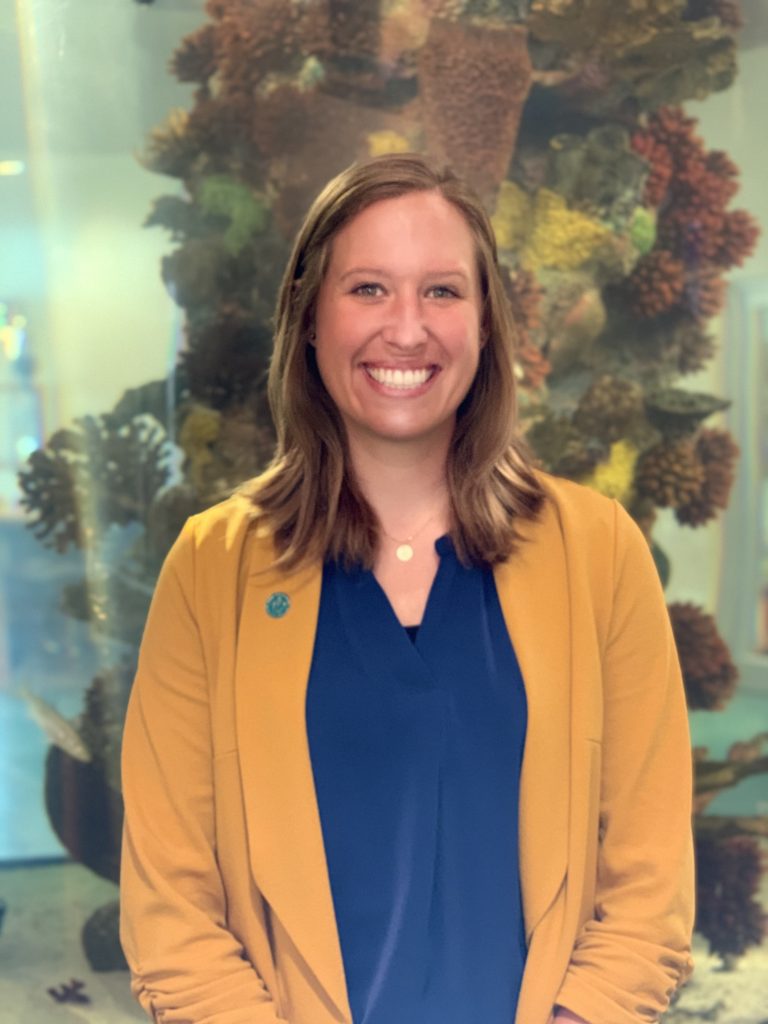 Before the call into the nonprofit role, Amy excelled in academia. She obtained a Bachelor of Science in Biology with a concentration in marine science. Following graduation, Amy spent several nesting seasons working with Kemp’s ridley sea turtles in Rancho Nuevo, Mexico. Inspired by this work to focus on the Kemp’s ridley during graduate school studies, she obtained her Master’s and Ph.D. degrees in biology from the University of Alabama at Birmingham. Her research has focused on the ecology, biology, and conservation of the Kemp’s ridley sea turtle, Texas’s state sea turtle! Her research interests include the dynamics of arribada nesting, the mass nesting events that occur in Kemp’s ridley (and Olive ridley) sea turtles, as well as hatchling biology.

To learn about our conservation program

Sanjuana joined Sea Turtle Inc. in 2017 and was hired as the Marketing & Public Relations Manager. She recently transitioned to Director of Marketing & Development in 2021. Sanjuana spearheads the development and marketing strategy for Sea Turtle Inc. Her priorities include developing new revenue streams, diversifying funding opportunities, and aligning messaging across the organization. Sanjuana has ten years of experience in the nonprofit sector. Before working with Sea Turtle Inc., she was a leader in an international collegiate volunteer organization and inducted as a White House Champion of Change in 2012.

Born and raised in the Rio Grande Valley and a Spanish speaker, Sanjuana attended the University of Texas at Brownsville. She believes fiercely in giving back and that issues can be solved with proper communication skills. She wants to utilize those skills to help maximize the efficiency of Sea Turtle Inc’s global reach. She currently lives with her husband and two daughters in Brownsville. 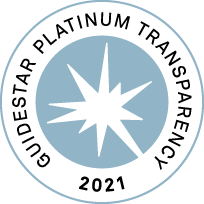 To Give To Our Cause 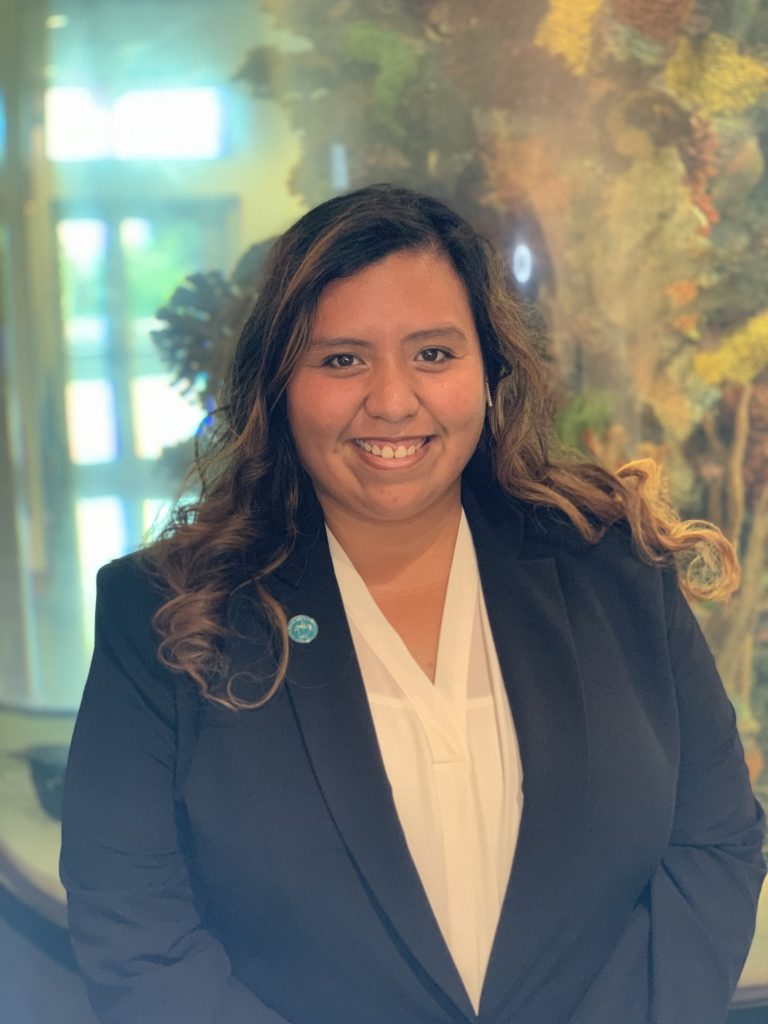 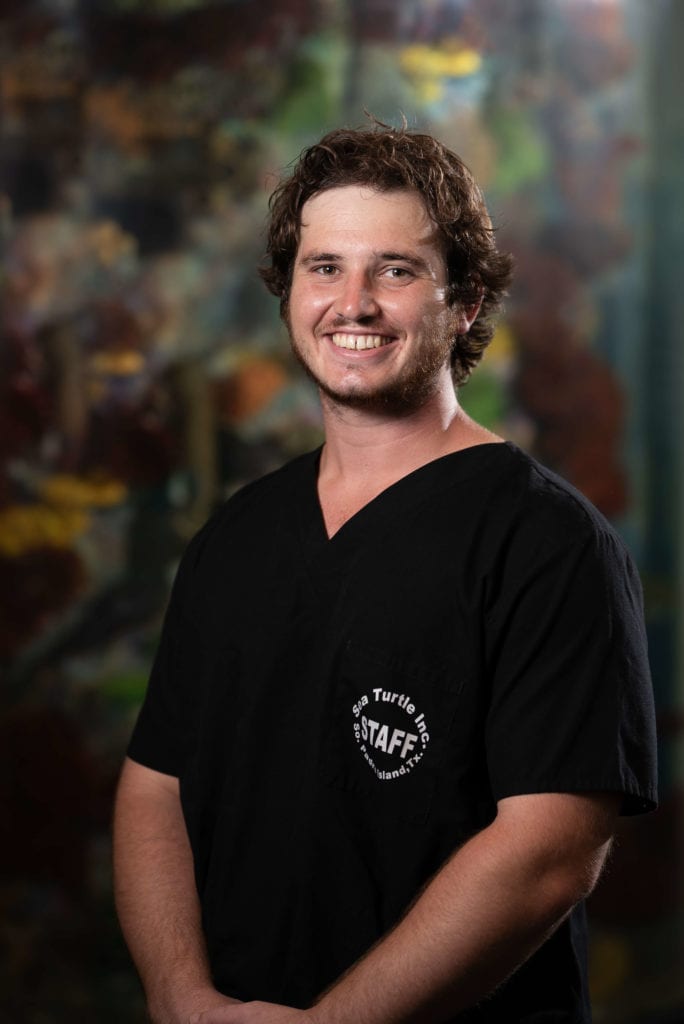 Chris joined Sea Turtle, Inc as an intern in 2018 and has been moving up leadership roles at Sea Turtle, Inc. since. Most recently, his hands-on sea turtle care work and a keen eye for animal care exhibit enhancements have gained him the Director of Animal Care role.

He has always had a passion for working with wild animals.
His previous roles include working at the Oakland Zoo with baboons, elephants, tigers, tortoises, sun bears, and giraffes as a commissary/night keeper intern has been his stepping stone. Before moving to Texas in 2018 to pursue an internship at Sea Turtle, Inc., he worked for Ducks Unlimited for two fall seasons. Chris was part of the animal care team that cared for five sea turtle species and directly contributed to the largest recorded cold stun in U.S. history by caring for over 5,500 sea turtles in eight days.

He received a Bachelor of Science in Evolution, Ecology, and Biodiversity from the University of California, Davis.

To Learn More About Our Turtles

Hannah joined Sea Turtle, Inc. as the Director of Education in 2021. She has always had a passion for educating people on the importance of conservation and what they can do to help the environment.
Since then, she has had the opportunity to work in various settings, from outdoor ecological education centers to aquariums. Her previous experience involves managing a small education team focusing on developing and implementing children’s programming, school group programming, and public programming. This allowed her to mentor individuals new to environmental education and helped them hone their professional skills. She is excited to share her passion for sea turtle education with the community and introduce future generations to the importance of conservation.
Hannah has a Bachelor’s and Master’s Degree from Coastal Carolina University. Her Master’s degree focused on coastal marine and wetland studies. As a Certified Interpretive Guide through NAI, she has expanded her teaching techniques and developed new program delivery methods.
To Learn More About Our Educational Opportunities 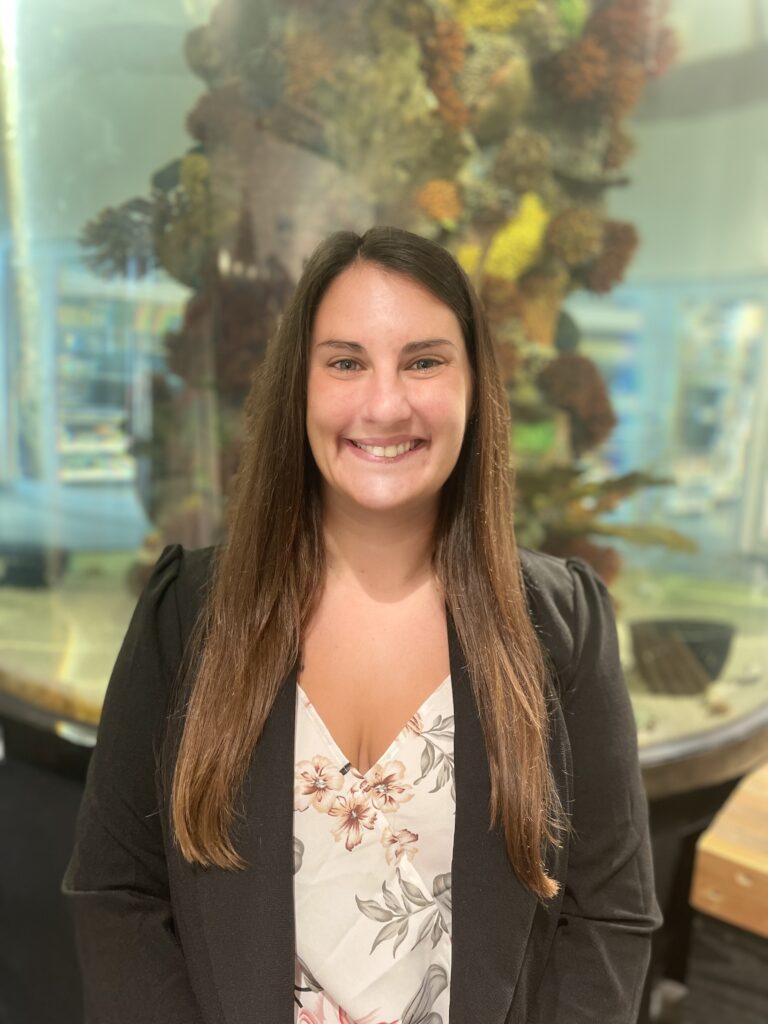 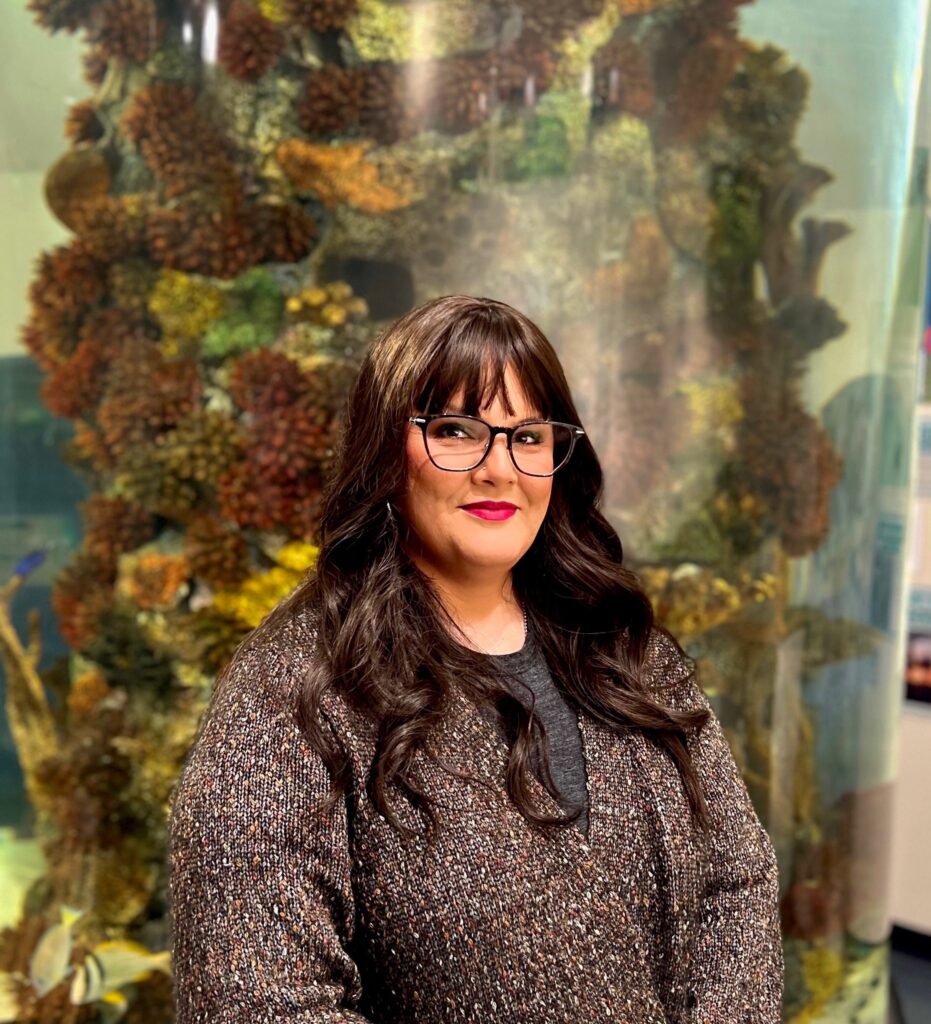 Kathryn is a seasoned retail professional and buyer. Driven by service, she takes pride in providing the best shopping experience possible. As the gift shop manager, her goals include attracting conscious-minded buyers and displaying sustainable products for purchase that directly supports Sea Turtle, Inc’s mission. In addition, she brings many years of retail and sales experience that has become detrimental to the facility giftshop’s growth and the online store.

She immensely believes in the conservation of our lands and our coastal ecosystem. After 20 years in retail/customer service, she has finally found an opportunity to contribute to both her passions.

To Shop Our Online Store 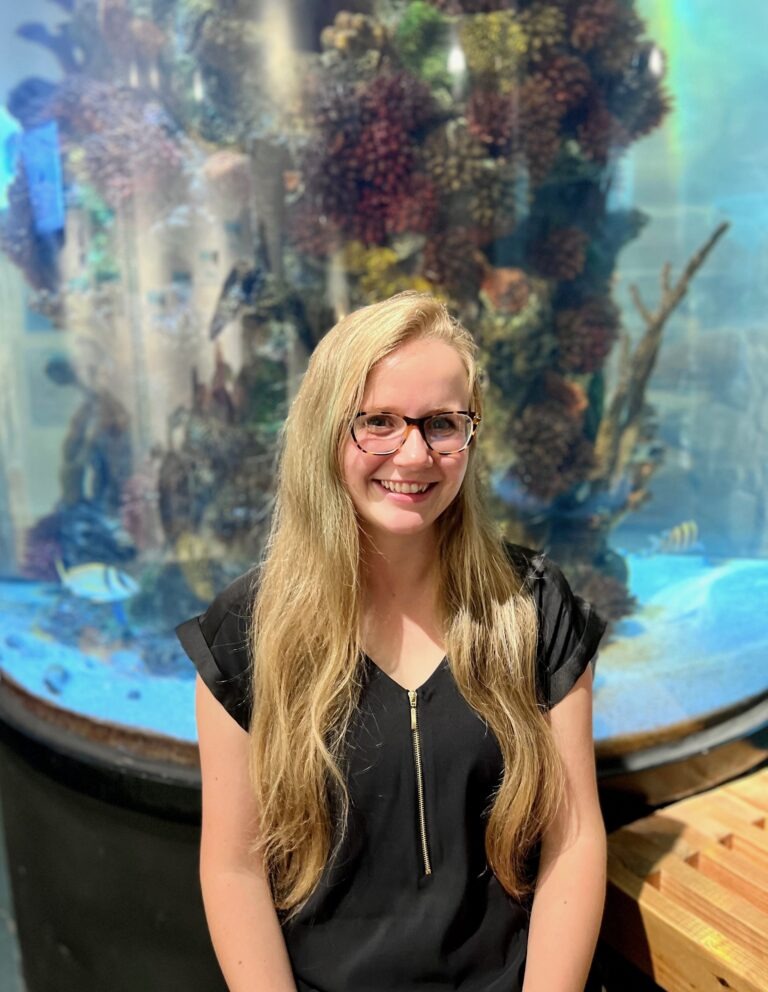 Maria joined Sea Turtle Inc. as the Aquarist in 2020. Before working at Sea Turtle Inc., she worked at the Jacksonville Zoo & Gardens in education. Then soon after, she became an Aquatics keeper, where she was in charge of 4 species of stingrays and Lionfish. Her life-changing experience came when she was a rehab intern at Karen Beasley Sea Turtle Rescue & Rehabilitation Center in NC. She soon founded the “I Skip the Straw” campaign from Ocean Conservancy on her campus, and now her campus is straw-free.

She thanks her family for immersing her in the coastal lifestyle (shrimping, crabbing, fishing, watching native wildlife, and doing beach clean-ups), which is where her love for the oceans and environment was born.

To Learn more about our turtles

Tess joined Sea Turtle Inc. as the Field Conservation Supervisor in 2021. Tess was drawn to sea turtles at a young age and knew she wanted to become a scientist. She spent the last few years traveling the globe working with nesting sea turtles in Panama, Australia, Cyprus, and the East coast of the U.S. A true scientist at heart, she continues to learn more. Tess is excited to continue and expand her research focus while sharing her passion for reducing and removing single-use plastics from the environment!

Tess received a Bachelor’s degree in marine science at Eckerd College, where she focused on DNA haplotypes of green sea turtles. She also holds a Master’s degree in Marine Vertebrate Ecology at the University of Exeter in England. Tess’s research focuses on the ingestion of plastic and other marine debris by green and loggerhead sea turtles.

To Learn More About Our COnServatioN PRogram 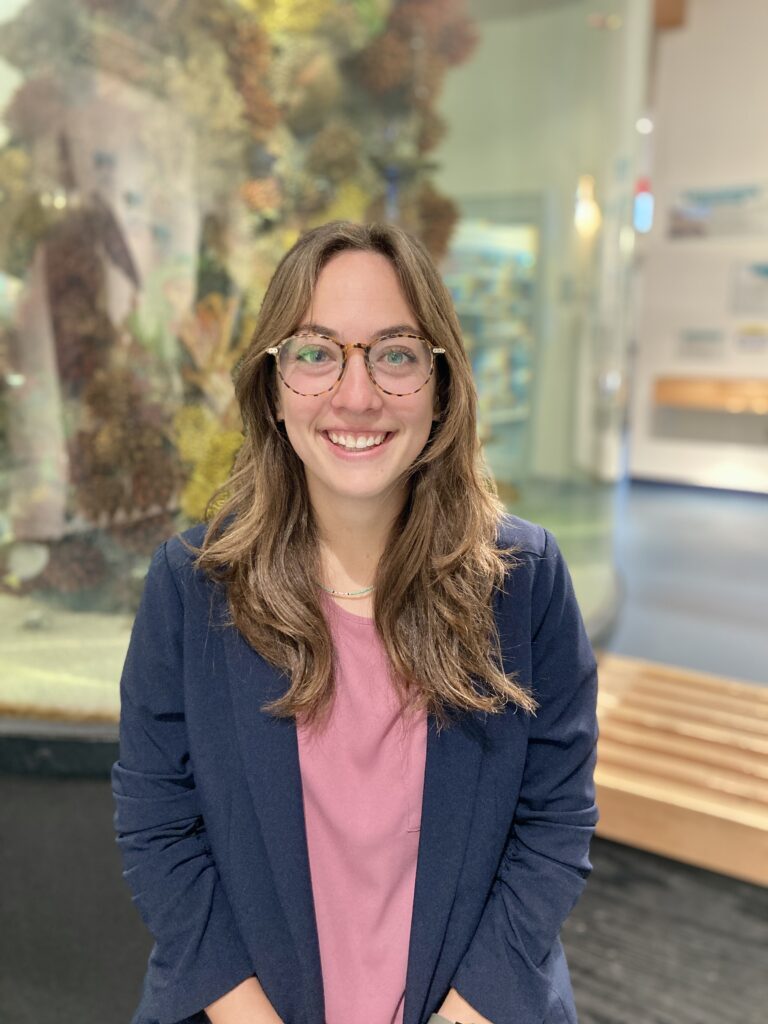 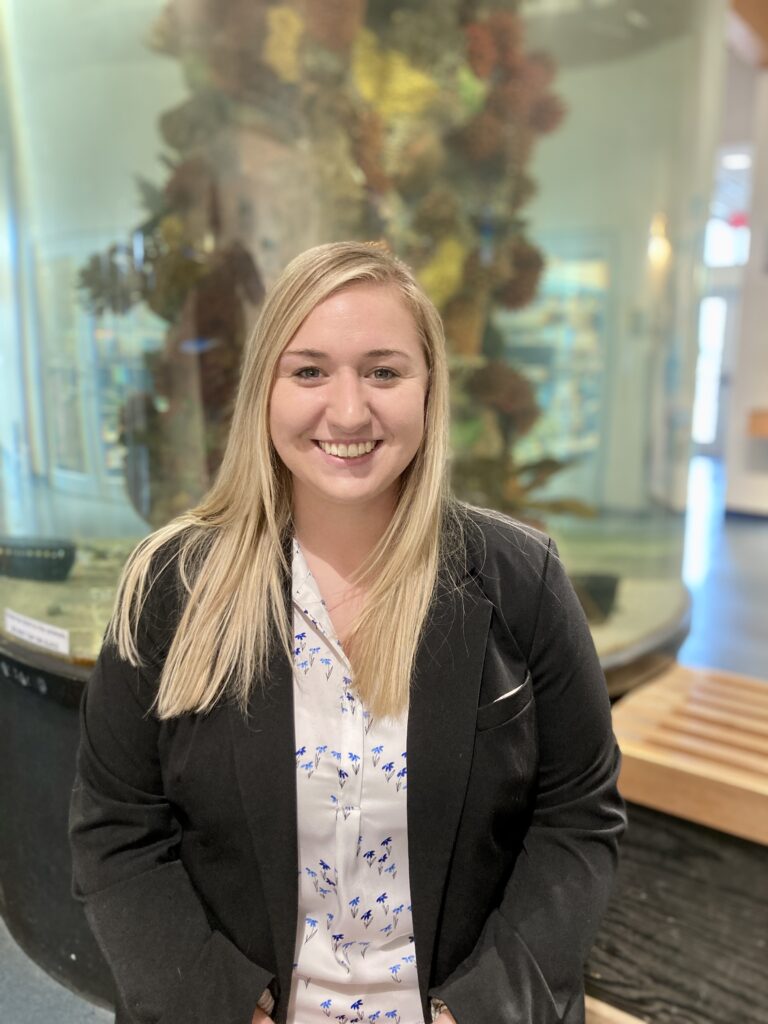 Taylor joined Sea Turtle, Inc. as an environmental educator in late 2021. Throughout her professional career, she has had the opportunity to work within various educational settings, from outdoor education centers to residential facilities.

Her passion for creating inclusive programming has allowed her to work with underserved communities within her home state of Massachusetts. She is excited to bring that same passion to Sea Turtle, Inc. and introduce new inclusive programming to education. Her previous experience includes work for the Massachusetts Audubon Society, where she had the opportunity to serve underprivileged youth throughout the school year, and as a camp counselor in the Summer. She has also created and delivered in-person and virtual programming for adults with disabilities. These programs gave participants more real-world, hands-on environmental experience.

Taylor has a Bachelor’s Degree in Geography focusing on Environmental Studies from Framingham State University. She is excited to bring new ideas and diversity to the Education Department!

To Learn More About Our Educational Opportunities
Scroll to Top