Hang Ten hatched from Nest #23 during our 2009 nesting season with a unique birth defect. Her front flipper was forked and curled underneath her body. She was released on the beach with the rest of the hatchlings from her nest, but washed up several hours later. Plans were in place to release her when she grew to a larger size but eventually we realized that she would not survive in the wild due to diving problems and difficulty hunting.

When she was smaller, she traveled to local events and schools to educate the public. She is too big to travel, but don’t worry, Hang Ten is still doing the job of educating! You can find her happily eating shrimp on any given day at our facility.

Hang Ten is the only resident sea turtle whose exact age is known. She was born from a nest that hatched on July 11, 2009. 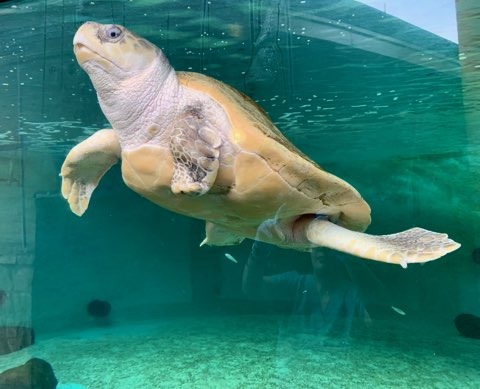 Hang 10 washed ashore on July 11, 2009 as a hatchling. Due to birth defects that affect her flipper, shell, and eye, she is unable to be released and is a permanent resident at our facility. When she was smaller, she traveled to local events and schools to educate the public. Now she is 10 years old and weighs 55 pounds. She is too big to travel, but don’t worry, Hang 10 is still doing the job of educating! You can find Hang 10 happily eating shrimp on any given day at our facility.