It is with a heavy heart that Sea Turtle Inc. shares the loss of one of our very dear and long-time residents Fred, the 220-pound loggerhead sea turtle.
Late yesterday afternoon Fred was found unresponsive in his tank, and the animal care staff immediately took action. After exhaustive attempts at resuscitation, Fred was pronounced dead just before 7 pm on June 23, 2021. The cause of death remains unknown, but a necropsy will be performed on Fred within the next week. “We are deeply saddened by Fred’s loss but hold on to his legacy of being able to reach well over a million visitors at Sea Turtle Inc”, said Wendy Knight, Chief Executive Officer at Sea Turtle Inc.

We want to thank the public for the outpouring of years of love for Fred, as well as your support for Sea Turtle Inc. Fred will be deeply missed by staff, interns, volunteers, and everyone who has known of this loveable loggerhead.
Should you wish to make a donation in memory of Fred you can do so we also encourage you to leave in the comments below your memories of Fred. Any photos can be emailed at info@seaturtleinc.org.
He will be missed greatly.

Fred the loggerhead was originally stranded in Port Aransas on 11/17/1996. He was entangled in a gill net, which resulted in the loss of his left front flipper. Typically sea turtles with three flippers can still survive successfully in the wild and he was released in 1997. He then re-stranded in Port Aransas in 1998 and then again 1999. Ultimately he was deemed non-releasable for unknown reasons and Sea Turtle, Inc. adopted him as a permanent resident in December of 1999.

Fred is an adult male loggerhead sea turtle. The way to identify a male or female sea turtle is by the length of their tail. When they are mature, the male’s tail will be notably longer than the female’s. 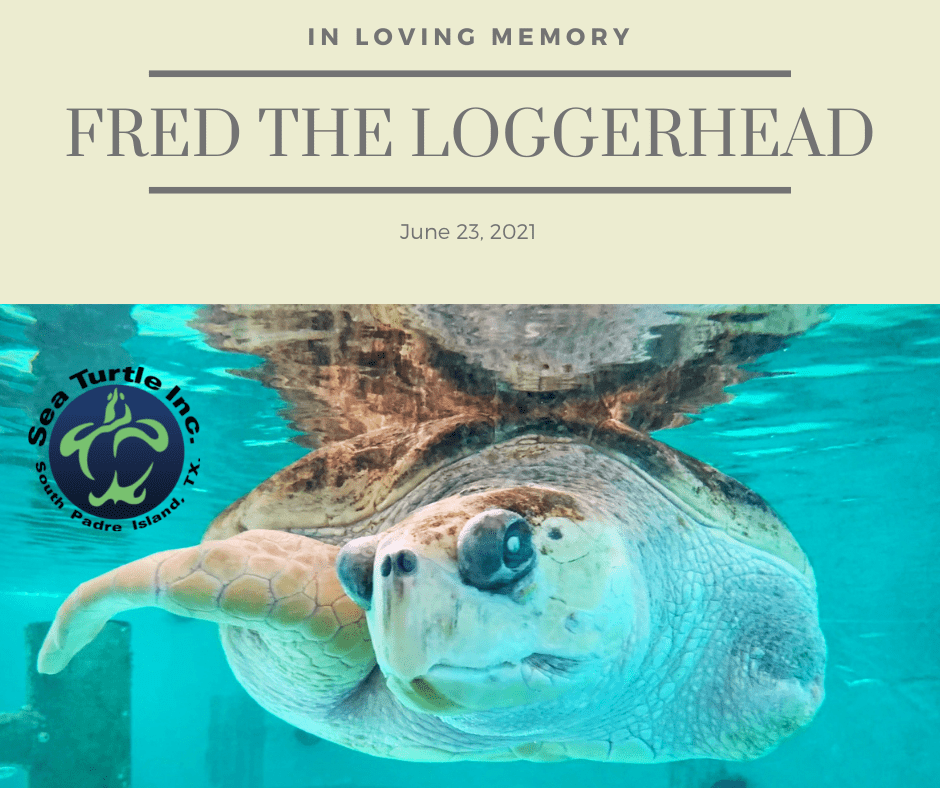 Ways to help In loving Memory of Fred's Recovery

Adopt In loving Memory of Fred